This Month in Space History | March

This Month in Space History | April 2020 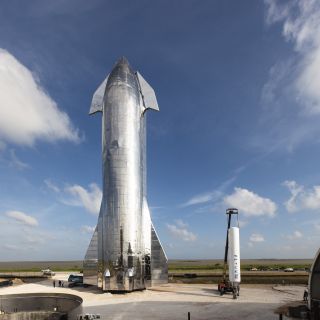 SpaceX’sfirst Starship prototype (left) stands next to one of the Falcon 1 rocket first stages at the company’s South Texas site in September 2019.
(Image: © SpaceX via Twitter)

WASHINGTON — “Why does Soyuz still fly?”

That was a question about Russia’s workhorse spacecraft posed by SpaceX founder and CEO Elon Musk at this year’s Satellite 2020 conference here. In a keynote conversation yesterday (March 9), Musk wondered aloud about the dangers of spaceflight stagnating in low Earth orbit, which he called the “local maximum.”

“I think we need to be very careful of getting stuck keeping a local maximum,” Musk said.

Low Earth orbit, which stretches about 300 to 1,200 miles above Earth’s surface, already holds the International Space Station (ISS), as well as many satellites. He noted that NASA’s space shuttle program, which operated from 1981 to 2011 and launched 135 missions, was “something that was really stuck in a local maximum for a long time,” and never progressed past low Earth orbit.

SpaceX’s Falcon 9 rockets have also flown to the ISS several times, and the company’s space capsule, Dragon, has as well — delivering cargo in an uncrewed version and once carrying a dummy astronaut. (The first Crew Dragon flight with astronauts is expected to launch later this year.  However, the Dragon capsule is only “capable of taking a few people at what is still a very high cost to Earth orbit.”)

To avoid the local maximum trap, the future of space transport needs “a whole new architecture, including reusable rockets.

SpaceX’s massive Starship rocket, which is intended to carry cargo and crew to Mars, was designed with this rapid reusability in mind. When fully functional, Musk said that Starship should be able to be relaunched within an hour of landing, with only nominal maintenance like refilling propellant. He envisions launching the massive spacecraft on three flights a day.

Musk also touched on SpaceX’s Starlink satellite constellation that will bring high-speed internet all over the world.

The upward of 30,000 satellites are scheduled to bring internet services to hard-to-reach communities that telecommunications companies can’t provide with landlines or cell towers. It could also bring in about $30 billion in revenue, Musk said. SpaceX launched its first 60 satellites in May 2019 and currently has 300 satellites in orbit, making it the biggest satellite constellation in history.

However, the scientific community has warned that such a surge in satellite numbers could overwhelm the night sky, damaging astronomical observations and even change how the public sees the night sky with just their eyes. But Musk insisted that Starlink will have zero impact on scientific observations.

He said that now that those initial 60 satellites are stable in their orbits, “I’d be impressed if somebody can actually tell me where all of them are. I mean, it can’t be that big of a deal.”

“I am confident that we will not cause any impact whatsoever to astronomical discoveries,” Musk added. “Zero, that’s my prediction. We will take corrective action if it’s above zero.”

After a smattering of nervous laughter from the crowd, the SpaceX CEO backtracked and said that the company is “actually working with senior members of the science community and astronomers to minimize the potential for reflection of the satellites,” to make sure observations aren’t affected.

This Month in Space History | October 2020

This Month in Space History | August 2020